2022.04.07 (Vrindavan Today News Service): April 2 to 10, 2022 India is celebrating the festival of Chaitra Navaratri – the nine nights dedicated to Devi. Like everything else, Navratri in Braj is also subsumed in Krishna Bhakti, whether through the worship and contemplation of Radha and her ashtasakhis or through the nine manifestations of Devi associated with Krishna lilas in various forms and names. Everyday during ‘Navratri’ our articles will take readers on the trail of Braj’s own shakti peethas – the nine energy centers dedicated to celebrating the feminine. On the sixth day of Navratri, we pay our obeisance to Shri Katyayani Devi of Vrindavan and Cheer Ghat of Braj

The legend of Sati’s immolation is one of the most widely-known stories of the ‘Puranas’. The 52 locations where parts of her divine body and ornaments fell became the shakti-peethas (literally energy centres). The place where her hair fell on the banks of Yamuna in Vrindavan is known as Katyayini Devi today.

According to another popular tale from the tenth canto of Shrimad Bhagavatam, in Dwapar Yuga, the Braj gopis made a vigraha of Maa Katyayini with the sand of Yamuna – the revered Braj-raj – and prayed to her to obtain Krishna as their husband. The ancient ‘vigraha’ is till worshipped at Cheer Ghat in the village of ‘Siyara’. It is one of the important sites on the Braj 84 kos Parikrama.

‘Vrindavan’ was Re-discovered by Shri Chaitanya Mahparabhu 500 years ago. Scores of temples were established by His followers and  the acharyas of different sampradayas. The area within the ‘Panchakos’ was considred as ‘Vrindavan’. Therefore another temple of Shri Katyayani Devi was founded in Vrindavan 150 years ago by Swami Keshavananda ji.

Swami Keshavananda ji spent about 33 years traversing the snow clad peaks and dales of the Himalayas meeting the existing masters under directions of his Guru Shri Lahiri Mahasaya. There he had the vision and direction of the ‘Divine Mother’ to proceed to Vrindavan and perform the most important mission of his life by locating the ‘Peethasthan’ mentioned in the Puranas, install the deity of Goddess Katyayani and initiate the regular worship of the Goddess for the benefit of the mankind in the present times. Guided by the dictates of the almighty he came to Vrindavan and started living in a small hut on the banks of river Yamuna in Radha Bagh and identified the Shakti Peeth. He gradually acquired the land and built the present temple and ashram in the year 1923, where he live the rest of his life until October 1942 when he attained ‘Mahasamadhi’. 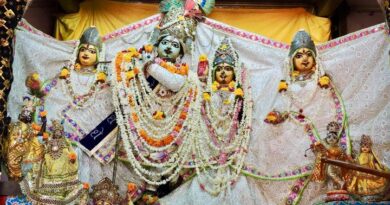 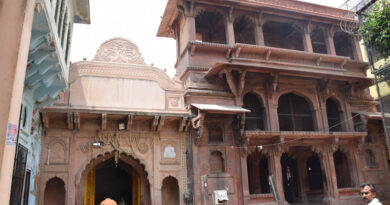