2022.03.13 (Vrindavan Today News): Ahead of Holi Festival, Mathura, Vrindavan and Barsana temples are seeing a huge rush of devotees. Due to overcrowding and suffocation, deaths of two devotees have been reported in the past two days. According to sources, in Thakur Banke Bihari temple even before “Rang Bharani Ekadashi” huge crowds of devotees are pouring resulting in confusion and suffocation among them.

Eyewitnesses said that on Saturday, the crowd of devotees was excessively high.

A sixty-three old woman from Satnam Society, Mumbai suddenly collapsed while awaiting darshan inside Banke Bihari Temple in Vrindavan on Saturday. She had come with a group of 50 devotees to offer prayers at the temples of Mathura and Vrindavan. A group of accompanying devotees tried to revive her initially. Temple security guards pulled her out of the extensive crowd inside the temple. With the help of Vrindavan Police the woman was taken to District Hospital, where she was declared dead by the doctors. Her group members took her to a private hospital to seek second opinion.

Later Dr. Harshvardhan of District Hospital said that the woman was brought in a very critical condition, and they had started with primary treatment to the patient. However, the patient did not respond to the treatment. One of her group members, Smt. Alka Agarwal informed that the deceased Madhu Agarwal was suffering from many health issues.

In the second incident, on Friday evening, a sixty-five year old man, Charan Das from Pathankot, Punjab died of cardiac arrest in Radha Rani temple Barsana. After attending the Lat Maar Holi celebration in Barsana, he had gone for a Darshan to Radha Rani temple. There was a huge crowd at the temple. Charan Das was feeling suffocated in the rush of pouring devotees. He died due to heart attack outside the temple.

Every time during the festivals, huge crowds gather in different temples. Such incidents of devotees suffocating or sustaining injuries in stampedes happen regularly. It is requested that authorities take due precautions and steps to avoid such incidents in future. 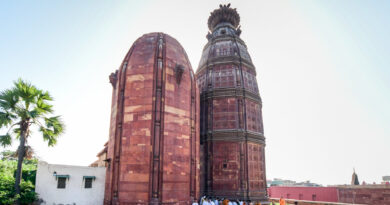