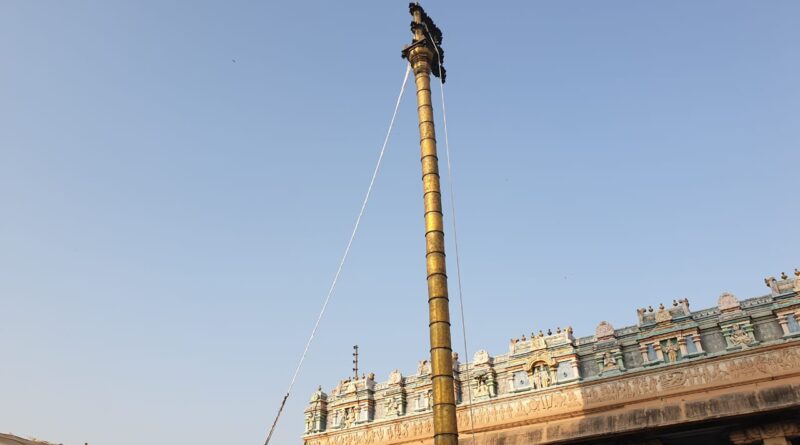 Vrindavan, 2022-03-20 (Anmol Mathur): Soon after Holi, the grand festival of ‘Brahmotsavamam’, or the ‘Rath ka Mela’ as the Brajvasis excitedly call it, is celebrated in Vrindavan. It is the most important observance in Rangji Temple. The grand festival celebrates the consecration of the deity; it is also known as patotsav or prakatyotsav in North Indian temples. This year ‘Brahmotsavam’ is being celebrated from 20 to 29 March.

During the 10-day festival, various sevas are performed and many processions are taken out, all around the town. The utsav deities are given royal baths before they come outside the main temple in colourful processions twice a day. Led by elaborately decorated elephants and horses, and flanked by musicians playing naadaswaram, They are paraded in various attires on different kind of mounts each day.

The Brahmotsavam begins by hoisting of the garuda dhwaja (flag) on the dhwaja sthambha (flag staff), popularly known as ‘sone ka khamba’. The humungous temple is decorated and illuminated with colourful lights, flowers and geometric designs called kollam or rangoli. Women joyously paint kollams in the temple corridor and open grounds to express their joy about Bhagwan Rangamannar visiting their homes in a royal procession.

The deities parade through the temple alleys displaying various forms of Krishna leela. On the first day of the festival, Shri Rangamannar enthrones Himself on the purnakoti vimanam – a golden palace bedecked with gems. In the evening, He mounts a silver lion to express His valorous side. Next morning devotees are blessed with the sight of Him gallantly riding the chariot of the Sun. In the evening He brings forth His pramahamsa, gyaan swaroopa on the swan chariot.

On the evening of ‘Garuda Vahana’ Shri Rangamnnar appears in His form as Mahavishnu riding the Garuda. This is one of the most popular darshan of Him. Next comes the ‘Gaja Vahanam’ – the silver elephant – stationed on which He marches with gaja gati (elephant like gait) to steal the hearts of devotees who travel from faraway places to attend the Brahmotsavam. On one of the days He appears as Shri Rama, sitting on a huge vigraha of Hanuman.

Every procession or sawari of Rangji is a delight in itself, being joined by hundreds of devotees doing nama sankeertana in Dravida style. Some of them struggle to rush ahead of the chariots to decorate His path with flowers, while others carrying the royal umbrella try hard to keep pace with Him. Occasionally, classical dances are also performed in front of the deities.

One of the unique traditions of Brahmotsavam is to give a glimpse of the important festivals of the year as a mark of respect to the presiding deity. A ‘mini Diwali’ is celebrated by putting up a firework show as Bhagwan Rangamannar goes around on the silver horse. Thousands gather to watch this spectacle. On one particular day, Shri Bhagwan is seated in a little glass and gold bungalow from which He comes out to play Holi with His devotees. People attending the procession splash colour and flowers on Him.

As the festival approaches its end, Rangji sends His sudarshan chakra in the palanquin to have a bath in the Yamuna, while the lordships Themselves proceed to the temple tank or pushkarni. Qualified pundits chant vedic mantras during the bathing rituals. Now is the time for the festival’s main attraction – Rathotsav or Rath Ka Mela as it is popularly called.

Shri Rangamannar and Godamba enjoy the ride through the town in Their lavish ratha decorated with festoons and flowers. The darshan of Shri Rangamannar as raas bihari from atop the silver moon soothes the hearts of devotees like nectarean moonbeams. Much like Puri’s Jagannath Yatra devotees eagerly wait for a chance to pull the chariot. It is a moment of great excitement and gratitude for them.

The last leela of the Brahmotsavam is pranay kalah utsavam, where Godamba fights with Shri Rangamannar for having neglected her. As devotees try to bring Him inside the temple, Godamba and Her team of devotees block the main entrance. They throw flower balls on Him and abuse Him while singing sweet songs. Finally Rangji defers and Godamba allows Him in. Seated in a floral palanquin, They go around the temple, and then the dhwaj (flag) is taken down signifying the end of the festival.

Over the years, Brahmotsavam has emerged as one of the biggest congregations of Vrindavan providing spiritual nourishment and enjoyment to the Brajvasis. The processions are thronged by thousands of devotees every day. After having darshan of Shri Ragamannar in the temple streets, they proceed to the stalls outside to enjoy the myriad tastes of Vrindavan. Ferris Wheel and other swing sports attract the kids. 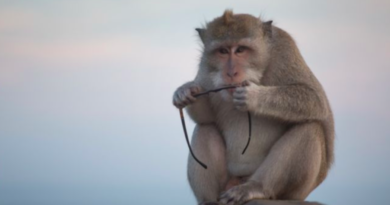