The Holi celebrations in the Braj region is famous for their color and gaiety throughout the country.

While the ‘Lathmar Holi’ of Barsana, the village of Sri Radha is well-known, few know of Holi celebrated at the Dauji temple at Baldeo. Baldeo is a town and a Nagar Panchayat in Mathura district in the state of Uttar Pradesh. Baldeo town is about a 25 km from Mathura .

“Dau Ji ka Huranga, the Holi of Dauji”, is celebrated two days after the festival of colors, Holi. In fact its not called Holi, but Huranga – which means a much more aggressive form of Holi . It is unique as Lord Krishna is replaced by his brother Lord Balram during the ‘Maharaas’ and only the descendants of Goswami Kalyan Deo Ji are allowed to play Holi in the temple precincts, but others are also welcome to become part of this Huranga.

The custom follows from the time when the rights of worship at the temple were awarded to Kalyan Deo Ji by the Acharya of Ballabha Kul sect Gokul Nath Ji, who installed the deity at the spot during Mughal emperor Akbar’s reign. Every year, on the second day after the full moon of Chaitra, bus loads of pilgrims arrive at the Dauji Temple in Baldeo. Dauji, meaning elder brother in Braj Bhasha, is both the local popular address for Balarama and his dham, or place. Although Braj is primarily known for its emphasis on Krishna devotion, Balaram reigns supreme during the spring festival of Holi.

In fact, although Holi is one of the most important and enthusiastically celebrated festivals in Braj, few outside of Baldeo know why Holi is such a special festival for Balaram. Holi is the most significant festival for Balarama who is the kul-devata for the Ahivasi Gaur Brahmans of Dauji. At this time, according to the Bhagavata Purana, Balaram returned to Braj (without Krishna) and had his own rasa-lila with the gopis. 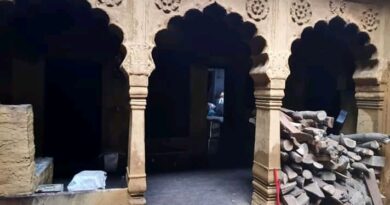 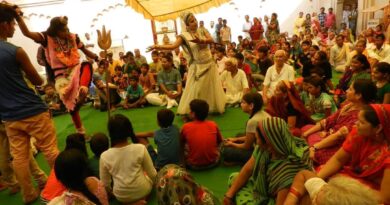