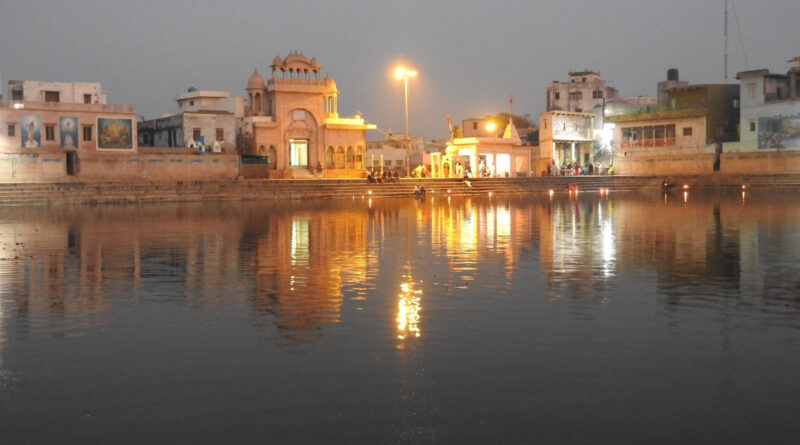 (Mahanidhi Madan Gopal Das): Although originating in the eternal Veda, the philosophies and practices of the various Indian spiritual lineages and their Gurus are often quite different from each other. The different Sampradayas sometimes augment their ideas and actions with knowledge collected from village folklore, local Brahmins, saints, and famous contemporary books.

Shri Rupa Goswamipada shows that occasionally this is also done in the Gaudiya Vaishnav Sampradaya. He says that the teachings in his book “Radha-Krishna Ganoddesa Dipika” come from the Vedas and other sources including:

As it was 500 years ago with Shri Rupa Goswamipada, it is the same today in Vrindavan where many of the spiritual ideas, beliefs and practices arise from oral tradition, local Brajwasis, new books, and famous Vaishnavas.

And for all these reasons, there is confusion about different spiritual truths and the location of Krishna’s pastime places. Some say Radharani appears in Raval, others say Barsana. Who’s right? They are both right, because transcendence, being unlimited in nature, can manifest in different times and ways to different devotees and transcendentalists.

Here are some more examples of confusion: In Braj today, there are two holy places called prachina (old, original) Gokula. One is ancient, and the other one was established 500 years ago by Shri Vallabhacaryaji.

There are two sacred places in Navadvipa Mandala, West Bengal claiming to be Sri Chaitanya’s “birthplace”. The ancient one, established 450 years ago in Navadvipa town, is called “Prachin Janmasthana”, or “Prachin Mayapur”. And the modern one established seventy-years ago called “Mayapur”.

As Gaudiya Vaishnavs, however, we understand the truth on all matters and attain spiritual perfection, Radha-Krishna Prema, by thinking, living and acting according to authentic Veda shastra and the teachings of our Gaudiya Vaishnav mahajanas.

Bhagavan Shri Krishna says, “If one acts independently without following the rules and teachings of the shastra, one will not attain happiness, spiritual perfection or liberation to Goloka Vrindavan.”

Although we see that individual Gaudiya Gurus, groups and missions have variant views and practices, still, most of the Gaudiya Vaishnavas accept and follow the final authority and teachings of the Six Goswamis.

The teachings of one’s personal Guru are like the district court, and the teachings of the Six Goswamis are the Supreme Court — the ultimate and final authority on all spiritual matters.

In this regard, Shri Krishna Dasa Kaviraja says:

Therefore, all sincere Gaudiya Vaishnavas accept and follow the teachings of the Six Goswamis in order to attain Krishna Prema, and the eternal service of Radha and Krishna in Vrindavan.

Shri Rupa Goswamipada mentions that one should bathe in Radha-kund on Karttik Bahulastami. In “Mathura Mahatmya” (420), He cites the Padma Purana: “One who bathes in Radha Kund on Bahulastami in Kartik becomes Haripriya, very dear to Shri Krishna.”

However, it is only Shri Jiva Goswami who clearly mentions the EXACT DAY AND TIME of the most glorious appearance of Shri Radha Kund. In Shrimad Bhagavatam (10.45.3) tika, Shri Jiva Goswami says, “Shri Krishna KILLED ARISTASURA ON CHAITRA PURNIMA (full moon: March-April) when Krishna was 11 years old.”

Determining the exact time of the full moon of Chaitra month, however, can be a little tricky. For example, this year (2021), the Hindi Vraja Bhumi Calendar and others say April 27th is Chaitra Purnima. However, the full moon begins 12.44 p.m. on April 26th and ends at 9.01 a.m. April 27th, which means Purnima is the night of April 26th.

“The Arista demon arrived in the middle of Pradosh Kala (late evening) when Sri Krishna was relishing Rasa Lila with His gopi sweethearts.”

After a brief tussle, Bihariji blasted the black beast and formed His beautiful Shyama Kund. After some playful joking with Priyatama, Priyaji and Her sakhis created the magnificent lake of love divine, Shri Radha Kund in one hour (10-11 PM), according to Shri Visvanatha Cakravartipada’s tika to Shrimad Bhagavatam (10.36.16): divyam-sarah-prakatitam–ghatika–dvayena

Now everyone clearly understands that according to our Gaudiya Vaishnav acharyas, Radha Kund and Shyama Kunda manifested near or about midnight 12 AM on Chaitra Purnima.

But then another question arises: Since there was confusion this year about Purnima, in the future how will you determine which day is right? Pandita Baba Shri Krishna Dasji Maharaja always told us, “YOU MUST FOLLOW THE SIX GOSWAMIS?”

Shri Jiva Goswami answers the question in Gopala Campu (I. 31.8):

“When the full moon of the Chaitra month is in the CITRA NAKSHATRA (star), that is the EXACT TIME OF THE APPEARANCE OF Radha Kund.”

By the mercy of Radhe-Shyama and Shri Jiva Goswami, we hope that now all the Gaudiya Vaishnavs are completely convinced about the exact day and time of the grand appearance of Shri Radha Kund.

So, you might ask, what is the significance of Bahulashtami?

Since then, the old Vrajavasi sadhus and Gaudiya saints say that Gaudiya Vaishnavas have been especially honouring Mahaprabhu’s discovery of Radha Kunda by bathing in Radha Kunda on Bahulastami in Kartik. The Goswamis also endorse this practice.

Shri Rupa Goswamipada in Mathura Mahatmyam (verse 439, 441) and Shri Sanatana Goswamipada in Hari Bhakti Vilasa (16.207, 210) both quote the Padma Purana, Karttik mahatmyam which says: “Anyone who bathes on the DAY of Bahulastami in Radha-kunda becomes very dear to Bhagavan Shri Hari, karttike-bahulastamyam, tatra-snatva-haripriya.”

Since the Goswamis did not give exact bathing times, Gaudiya Gurus in Radha Kunda direct disciples on Bahulastami to take a daytime dip in the beautiful kunds of love divine.

Chaitra Purnima is the actual appearance day of Radha Kund, and Karttika Bahulashtami is the day that Sri Caitanya Mahaprabhu discovered Radha Kund.

Unfortunately, this year the Radha Kund Chaitra Purnima snana is cancelled because of curfew and lock down due to the pandemic. So devotees should mentally observe this grand festival of the appearance of Sri Radha Kund. 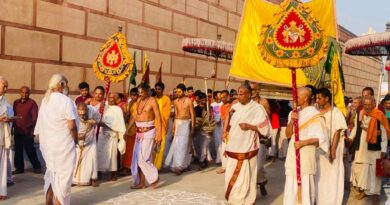 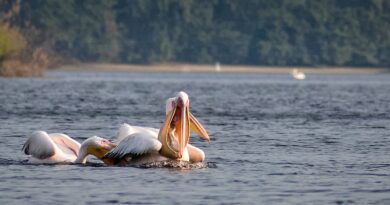 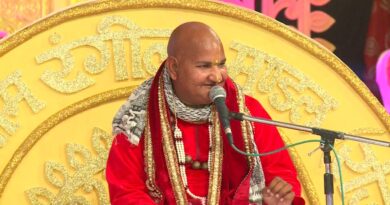