“Imli” means “tamarind tree” and “tala” means “at the base of”. Because Śrī-Śrī Rādhā-Kṛṣṇa and Śrī Caitanya Mahāprabhu performed many amazing līlās under this imli tree, this holy place has come to be known as “Imlitalā.” Imlitalā is counted among Vṛndāvana’s Prācīna-devālayas or most prominent ancient places of worship.

Śrī Caitanya Mahāprabhu arrived in Vṛndāvana on the day of Rāsa pūrṇimā in Kārtika in 1515. Every morning He sat in solitude under this tamarind tree, gazing at the Yamunā and relishing the divine beauty of Vṛndāvana. He also performed harināma and spread the message of devotion to Śrī Hari to qualified people at this holy place. Śrīla Kṛṣṇadāsa Kavirāja Gosvāmī wrote:

“In the morning, Śrī Caitanya Mahāprabhu used to take His bath at Cīra-ghāṭa in Vṛndāvana. He then went to Imlitalā, where He sat down. The tamarind tree was very old, having been there since the time of Lord Kṛṣṇa’s pastimes.” – Caitanya-caritāmṛta 2.18.75.

“When Śrī Caitanya Mahāprabhu was sitting in solitude under the imli tree and seeing the dancing waves of the Yamunā, He remembered His water-sporting pastimes with the gopīs during His previous Avatāra as Śrī Kṛṣṇa. Embracing the sweetness of Rādhikā’s love in the core of His heart, He entered into rādhikātma-bhāva or empathic union with Her. He thus fulfilled His three internal desires and His heart was completely captured by Rādhārāṇī. Imlitalā is the place of origin of gaura-tattva, for it was here where in Dvāpara-yuga, Śyāmasundara became fully absorbed in the devotional mood of Śrīmatī Rādhārāṇī and became Gaurasundara. I offer my obeisance to that Lord Gaurasundara, who eternally resides in Imlitalā, and who is the abode of prema.”

Over 5000 years ago in Dvāpara-yuga, in Imlitalā, Śrīmati Rādhārani’s supreme victory was celebrated with Her coronation as Vṛndāvaneśvari, the Queen of Vṛndāvana. In Vṛndāvana, the mood of worship is very sweet, because Rādhārani becomes the Supreme Goddess and Kṛṣṇa accepts a role subordinate to Her.

Once, during the performance of Rāsalīlā, Rādhārani was not given Her deserved special attention by Kṛṣṇa. She thus became sulky, left the Rāsa dance and crossed the Yamunā with Her sakhis. In a secluded spot, She sat down and wept. Absorbed in thoughts of Kṛṣṇa, Her empathy with Him reached such an intensity that Her entire body turned blue like Kṛṣṇa. Thus before Kṛṣṇa entered Rādhā’s mood and turned golden, Rādhikā entered into empathy with Him and assumed His dark blue effulgence. Tears cascaded from Her eyes and soon formed a beautiful lake, wich was named Māna sarovar – the lake formed of Rādhā’s tears of māna or sulkiness.

Meanwhile, Kṛṣṇa didn’t feel the usual bliss and realized that His most beloved Rādhārani is missing from the Rāsalīlā. He quickly left the Rāsa dance and began desperately looking for Her everywhere. Unable to find Her, He remembered how She was once crowned the Queen of Vṛndāvana under the tamarind tree in Imlitalā. He thus he took shelter of that tree and started crying out, “Rādheee! Rādheee! Please save my life by giving me your darśana!

Rādhārani’s holy name is non-different from Her mood and golden colour. Thus, while chanting Rādhā’s name, Kṛṣṇa soon became immersed into Her mood of service and also attained Her golden effulgence, assuming the golden form of Śrī Caitanya Mahāprabhu! Imlitalā is the holy place where Mahāprabhu’s beautiful form manifested for the very first time. Kṛṣṇa, being immersed in empathy with Rādhārani, got a taste of the glory of Her unparallelled love for Him, of His own sweetness that only She can relish fully and of Her unsurpassed ecstacy when She serves Him. He had thus gotten a taste of fulfilling His three internal desires mentioned by Kṛṣṇadāsa Kavirāja Gosvāmī (Caitanya-caritāmṛta 1.1.6.).

Much later, in Kali-yuga, Nityānanda Prabhu came to Imlitalā. He foresaw Mahāprabhu’s arrival and prepared His āsana here. When Mahāprabhu came to Vraja, He spent most of His time on this āsana under this imli tree, chanting Kṛṣṇa-nāma in seclusion. While chanting Kṛṣṇa’s names, due to the seeing the uddīpakas or stimulants of vraja-līlā in Vṛndāvana, He once again turned blackish like Kṛṣṇa and lost the treasure of rādhā-bhāva. To make sure He won’t lose rādhā-bhāva again, He decided to return to Purī, although He had only spent a few months in Vṛndāvana. This is the confidential reason why Mahāprabhu performed His concluding pastime in Purī.

Sevakuñja is accepted as the heart of Vṛndāvana because here Kṛṣṇa attains the treasure of His heart – the service of Rādhārani’s lotus feet. However, nobody can serve without the proper mood of service, especially not Kṛṣṇa, who is used to being ādi-puruṣaṁ, the supreme enjoyer. He has to first attain seva-bhāva, the mood of service. And for that He first comes to Imlitalā before He enters Sevakuñja. In the same mood, according to local tradition, pilgrims first have darśana of Imlitalā before entering Sevakuñja.

There is a little known book called Imlitalā Mahātmya by the Founder Ācārya of the Śrī Gauḍīya Saṅgha and Sevait of Imlitalā, Śrīla Bhakti Saraṅga Goswami Mahārāja. We are happy to announce that it has now been translated into English and that it will soon be published. Also, a book called Yoga of Empathy that will dwelve deeper into the topic of empathic union is in the making. Both publications will be announced on www.nectarpot.com.

Radhamadhav Das is a researcher, author, environmentalist and vraja-upāsaka living in Vrindavan.

These would later be fulfilled in Purī (dvādaśa vatsara śeṣa rahilā nīlācale (…) āsvādiyā pūrṇa kaila āpana vāñchita – Caitanya-caritāmṛta 1.13.39-43). But even just getting a taste of their fulfillment, Kṛṣṇa entered into a deep state of samādhi and attained a unique siddhi or perfection. This is why Imlitalā is called Siddhapīṭha – holy place of perfection. It is from this seed form of empathic samādhi that Kṛṣṇa’s gaura-līlā exploded infinitely and showered its fruits of gaura-prema on one and all. 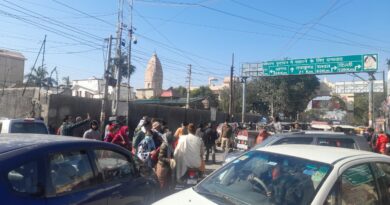 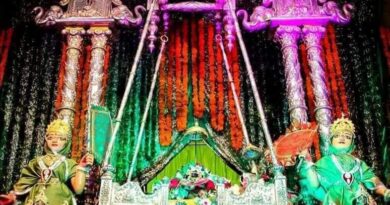