The petition was started by River Connect Campaign Agra on October 25.

Vrindavan, 2021-10-28 (Vrindavan Today News): In a first, the River Connect Campaign has started an online petition on Change.org to save the Yamuna in Agra. Spearheaded by the initiative’s prominent member, social activist and journalist Brij Khandelwal, the petition filed on October 25 has received huge traction and has crossed the 1000-signatures mark at the time of writing this article.

In the next step it will be taken to Prime Minister Narendra Modi where along with registering its demands regarding the cleaning and reviving of Yamuna in Agra, the River Connect Campaign will also appeal for a National Rivers Policy and constitution of a Central Rivers Authority to oversee and manage related affairs.

The plight of Yamuna in Agra which is mostly a dry sewer all-year-round except in the monsoons is a glaring truth that evades none.

At a rally held at Kothi Meena Bazaar Maidaan in 2014 Prime Minsiter Narendra Modi had promised to clean up the river and rejuvenate it. Minister for Road Transport and Highways, Nitin Gadkari had also announced his plans to start ferry service for tourists between Delhi and Agra. Although intended as a tourism project, it would have meant that the river would have a minimum water flow throughout the year.

In 2017, another initiative to construct a barrage downstream of Taj Mahal was announced by Uttar Pradesh Chief Minister Yogi Adityanath. The plan, had it been implemented, would have helped in storing rain water, thus providing an effective solution for the pressing concern of depleting water reserves,” states Khandelwal.

However, no action has been taken on any of the promises yet, and the Yamuna in Agra continues to remain dry and heavily polluted.

Raising requests for desilting, dredging, cleaning, removal of encroachment from the flood plains and ensuring year-round minimum water flow to sustain acquatic life, in addition to taking all possible steps to maintain the overall sanctity of the river, Khandelwal further wrote that “The union and the state governments should immediately get into action mode, and restore the original glory of Yamuna, one of the holiest rivers.”

The petition can be signed here https://chng.it/dqfmLPSSQF 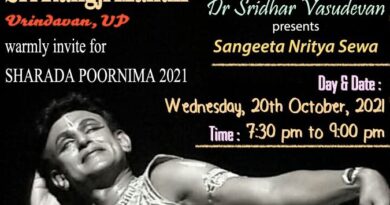 Madhavas irks Brajwasis yet again; why the apology won’t suffice…