Ash smeared sadhus wearing just rosary beads surrounding themselves in fire attracted a huge crowd on this week’s Kumbh Mela in Vrindavan. Sitting behind smoke screens in a state of trance, the holy men have converged in Vrindavan.

These sadhus belong to monastic orders called Akharas, live in remote areas, stepped out for the Kumbh Mela. They can be seen doing austerities by sitting in the extra heat caused by the circles of little fires.

These Tapasvis attain sadhana, by fasting for the entire day, surviving on the limited intake of fruit at times, meditating and praying for fixed hours in routine. Yoga is practiced during the day under the scorching sun surrounded by burning cow dung cakes that emanate fire and thick smoke.

These sadhus observe what is called the ‘Panch Agni tap’ or five fire austerity, known as ‘Dhuni tap’. This is one of the oldest forms of penance by sadhus, who perform this harsh form of austerity which can go for several years. This penance of Panch Agni Tap begins around Basant Panchami.

The ancient texts of Shiv Puran and Padma Puran have mention of the Panch Agni Tap, where a sadhu is surrounded by a burning fire and sits for meditation for hours.

“The actual practice of this sadhana is surrounding oneself with a ring of burning cow dung, sitting under the hot mid day sun which acted like the fifth fire. It is now practiced with varying number of fires, starting with five and progressively increasing in number during the 18 years duration until the fires form a circle and the sadhu carries a pot with fire on the head,” said Shri Vishnu Das Baba.

“An integral part of the exercise is the ritual offering of food articles to the smoldering heaps of cow dung – the holy fire while reciting mantras.  The sadhu, performing this penance blows a conch shell after the offerings in order to invoke the deity,” added Shri Vishnu Das Baba.

The Panch Agni Tap must be done for 18 consecutive years, passing through various stages, there are seven, twelve and 84 fires culminating in innumerable or a circle of fires. In the final stage, a pot of fires is balanced on head. Each stage is performed for three consecutive summers.

When a group of ascetics assembles, for instance at Kumbh, they perform dhuni –tap at the same spot but each will do it in his own time. Since meditation and repetition of Lord’s name is private affair, the seers sometimes cover the head with a cloth. The final stage of the fire austerity is called Kapal Dhuni, that is fire (dhuni) in the bowl (kapal) and bowl on the skull.

Life can be hard enough as it is, but undergoing this kind of austerity helps condition a person for concentrating on the ultimate goal of life by meditating on the Supreme Power under intense conditions of all kinds. 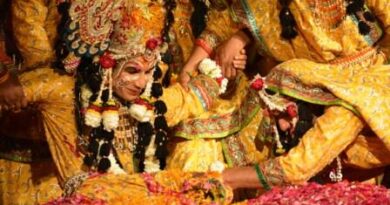 Gopis Were the First Acharyas of Raaslila 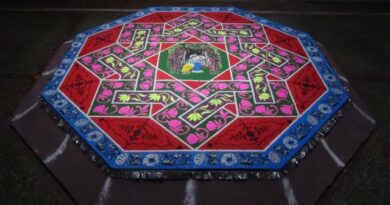