First Shahi Snan of the Vaishnavite Kumbh was held today at Vrindavan. Large numbers of Sadhus, common pilgrims and tourists from around the country reached to take holy bath in Yamuna on the pious occasion of ‘Maghi Purnima’.

The first Royal Bathing or Shahi Snan of Akharas officially began proceedings for regular pilgrims to take their holy dip during the Vrindavan Kumbh Mela. Tens of thousands pilgrims and followers of Akharas, Mahamandaleshwars  and religious leaders took the holy dip in Yamuna.

The Shahi Snan began around 6 am, with a procession from Devraha Baba Ghat, led by the Ani Akharas, which passed through the different parts of Vrindavan through the markets. The residents, devotees and traders showered flowers on the tableau of the Sadhus.

Heavy security arrangements were in place for smooth conduct of Royal bathing of Akharas.  Travel restrictions imposed by the police, however, caused discomfort to the pilgrims’ especially older people and pilgrims with children. With no private vehicles or state transports were allowed, the pilgrims were forced to walk several kilometers to reach the bathing ghat at Kumbh Mela site.

The Kumbh Mela in Vrindavan is held one month before the Haridwar Kumbh after every twelve years on the bank of Yamuna.  This Kumbh is very special for Vaishnavas as it is known as Dev Kumbh (the Kumbh of the gods), organized on Yamuna Pulin, where the Raas Lila was performed by the Divine Couple of Vrindavan. 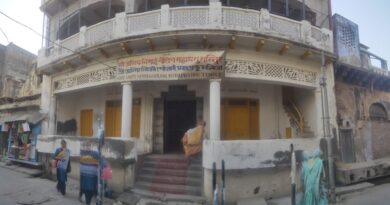