Four ancient deities of Lord Shiva residing at Mathura are known as dik-palas, “protectors of the directions.” They stay in Mathura to protect the dhama. Bhuteshvar Mahadeva protects from the western side.

The tradition amongst the vaishnavas is that when coming to Braj one must first go to Mathura to take permission from him to enter the dhama. The reasons for this are described by Srila Rupa Gosvami in his Mathura-Mahatmya (texts 234-238), wherein he has quoted the following verses from the Adi-varaha Purana recounting Krishna’s words about Bhuteshvar Mahadeva

“O deva! You will be the protector of Mathura. O greatest of the gods! Whoever sees you will attain My abode. By seeing Bhuteshvara Mahadeva, all sins are destroyed. O Vasudha, one who sees him, achieves the land of Mathura. In Mathura is the deity of Lord Bhuteshvara, who grants liberation even to the sinful. This Bhuteshvara deity is very dear to Me.How is it possible for a sinful person who tries to worship Me but will not worship Bhutesvara shiva, to attain devotion to Me? Those who are bewildered by My maya, who are the lowest of men, will not meditate on, bow down before, or offer prayers to Lord Bhuteshvara.”

How wonderfully beautiful is this place in the forest! Here Lord Gopishwar Shiva is manifest as a liṅga beyond the touch of material nature’s modes.

This deity of Lord Sadashiva protects the Vrindavan forest. By worshiping this deity, one attains perfection in all one does.

To attain Lord Krishna’s company, the gopīs always worship this deity. Carefully they place many offerings before Him.

How can I have the power to describe all the great glories of this deity? Because the gopīs worship Him, this deity is called Gopishwar, master of the gopīs.

Gopeshwar Mahadeva is one of the most prominent deities in the Gaudiya-sampradaya and is mentioned in many Gaudiya literatures, being a very ancient protector of Sri Vrindavan Dhama. It is said that one cannot enter Vrindavan without his permission. His glories are sung throughout the Gosvami literatures

I offer my respectful obeisances to Sri Gopishvara, who is merciful Lord shiva himself. He removes  troubles and grants spiritual love in Vrindavana. (Sri Bhakti Ratnakar 5.3741)

In the song Vraja-dhama-mahimamrta, the following line is sung:

“All glories, all glories to Gopishvara shiva, who resides in the holy dhama of Vrindavana.”

Kama means “desire”. It is said that Kameshvara Mahadeva is the fulfiller of one’s desires.

Srila Narahari Cakravarti has described Kameshvar Mahadeva in his Bhakti-ratnakara (5.841): See here the most powerful Shiva as Kameshvar.

Kameshvar Mahadeva resides in Kamyavan in the western part of Braj-mandala. According to the tradition in Braj, Vrishabhanu Maharaja worshipped Kameshvar to get a daughter. He already had a son, Sridama but now, he wanted a daughter. Kameshvar granted his desire and he obtained Srimati Radharani as is daughter.

On the northern bank of Manasi Ganga, by Govardhan hill is a group of five Shiva-lingas that are famous by the name Chakaleshvar Mahadeva. These five Shiva-lingas are considered to be Lord Shiva’s five faces. They protect the area of Govardhan. This part of Manasi Ganga is known as Chakra-tirtha and because he stays at this place, this shiva-linga was originally known as Chakareshvara, but now he is known as Chakaleshvara. It is said that this place is called Chakra-tirtha because when Krishna lifted Govardhana Hill, He requested the Sudarshana Chakra to appear above the mountain to dry up all the rain coming down on Govardhana, so that the Vrajavasis standing underneath would not drown. After Indra withdrew the Samvartaka clouds that he had sent to destroy Vraja, and the danger was over, Sudarshana requested Krishna to give him a place to rest. Krishna gave him this place on the northern bank of Manasi Ganga.

The present temple of Chakaleshvara Mahadeva is recent; the original one was destroyed by the Muslims. However, the deities here are very old and are said to have been installed by Krishna’s great-grandson Vajranabha.

The palace of Nanda Maharaja is situated atop Nandeshvar hill in Nandagaon. This hill is a form of Lord Shiva, who performed tapasya for several thousands of years to enter into the Lord Krishna’s pastimes in Vraja. When the Lord was pleased with him Shiva asked for a boon of getting a chance to witness the Vraja pastimes of Lord Krishna by becoming a hill or a stone. Reciprocating with this desire, Lord Krishna granted him this form in Nandagaon.

The devotees declare that Nandisvara hill, the form of Lord Shiva now shining as Nanda Maharaja’s capital, is an endlessly beautiful crown decorating Vrindavan. Lord Shiva has stayed at Nandagaon in the form of Nandeshvara Mahadeva and even today, the carnamrta and maha-prasada of Lord Krishna is first offered to him. 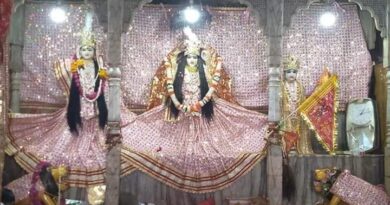 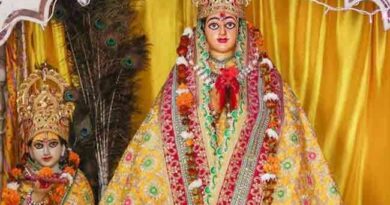 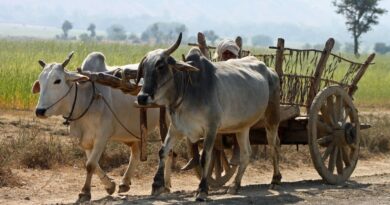