2021.07. 17 (Vrindavan Today News): Vrindavan was known for its architectural ghats on Yamuna. The princely states and the nobles built 48 ghats in Vrindavan to commemorate the lilas of Shri Krishna. While Yamuna is obstructed to flow on the ghats, and many of the ghats have been destroyed, there are still some magnificent structures of the ghats worth visiting.

The Ghats of Yamuna in Vrindavan have legends behind it. Each ghat has a temple associated with it.  Between Imlitala and Shringar Vat, there is a ghat called Ranpat Ghat, originally known as Ranawat Ghat. The legend of this ghat is related to Mirabai. Opening onto the ghat is a temple, which houses the beautiful deities of Shri Radha-Kant Ju.

According to legend, the King of Mewar  (Rana), who was Mirabai’s brother-in-law, made this temple for her when she came to Vrindavan. However, Mirabai refused to stay in it, preferring instead to live in the wilderness of Vrindavan forest. Some say she lived in a gupha (underground cave) where Mirabai Mandir is now. Others believe she lived in a chatri at Brahmakund, where she could easily enjoy the darshan of the King of Vrindavan, Govind Dev.

The legend goes on to say that, although Mirabai didn’t live at the property, she would come every day to worship the deities of Shri Radha-Kant which her family had installed there. Unfortunately, just over half a century ago, the deity of Shri Krishna was broken, and another deity was brought from Gokul to replace the broken one. However, the deity of Radharani is from Mirabai’s time.

The Ranapat Ghat property consists of the ghat itself, four chhatris (gazebo-like structures made of sandstone), the temple, a living area and a garden. According to Mathura: A District Memoir by the British magistrate F.S. Growse, Ranawat Ghat was built by the King of Udaipur. About 330 years ago, the property was purchased by Guru Prasad Roy, a friend of the King’s family, for 3,675 rupees. Since then, the property adjoining the ghat is known as Guru Prasad Roy Kunj.

In the late 18th Century, Shri Hit Chandra Lal Goswami of the Radhavallabh Sampraday described this kunj, saying a very dedicated female devotee lived there at that time. He also mentioned that the kunj was sheltered by two very large trees – one tamal and one neem. His description with elaborate commentary can be found on page 48 of the Vrindavan Prakash Mala. (originally published in ‘Vrindavan Today’) 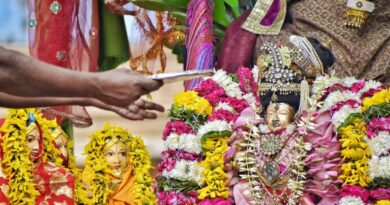