Humans are caged, monkeys run wild. It may sound weird, but one can easily witness this in Vrindavan.  One can see how the houses are grilled with metal so that monkeys can’t enter in it. If the doors are open monkeys steal everything from cloths to any valuables.

Monkey menace in Braj, especially in Vrindavan is turning out to be a major deterrent for the pilgrims, as well as locals. The incident of the monkey attacks has increased many folds in the recent past; so has the simian population. In several cases it turned fatal as many people died falling from the roof. It has become difficult for the women, children and elderly people to walk in the older part of the town because of the fear of a monkey attack.

Monkeys snatching glasses, mobiles, cameras and bags are commonly visible in the Vrindavan streets. The victim can only get back the stolen item with the help of some locals in return of some food given to the monkeys. These days the fruity packets are the most favorite for them. At times the monkeys make pilgrims virtually captive by holding both their legs together. The pilgrim is set free, only when the simian is offered food. They deprive the tourists their specs, ladies their handbag and children their eatables. They even attack pilgrims without being incited.

They also attack locals when their hunger is at peak. Some monkeys have turned non vegetarians as they have been seen eating the eggs from the nest of the birds. They catch the young birds which couldn’t learn to fly and eat them.

The brajwasi residents are living in great fear, and the monkey menace has become the top most issue of Vrindavan.  The monkeys have not become danger not only for humans, but for the peacocks and other animals. There have been several incidents that the pack of monkeys has killed the street dogs. The trees can’t grow as the hungry monkeys eat its leaves and break it. The existing full grown trees are also in danger as the number of monkeys is far more than the existing trees in proportion. When hundreds of monkeys jump on a tree it causes the death of the trees.

The monkeys are living in great problem too. Many of them are sick and can’t claimed to be healthy. People allege that many of the monkeys have tuberculosis, rabies and even aids. Since the monkeys live in proximity with the humans, any day these disease may outbreak in the humans. The government and district administration have consistently failed in finding any solution to the monkey menace. There have been ‘seasonal talks’ during elections about monkey safaris, relocation, and sterilization, but no substantial or effective on ground measures have been implemented yet.

The human monkey conflict is a multi – dimensional problem and the solution lies in multi – prolonged strategy. A holistic approach is required to solve the problem. While one easily blame the monkeys for the menace created by them, but the bigger question is who is responsible for the plight of the monkeys?

The behavior of the monkeys varies from place to place. The translocation of monkeys is not solution as this only shifts problem from one area to another. Apart from management of population, the conflict management is also required. Fruit bearing species are required to be planted in the forests.

The human habitat is also spreading and is reaching the forests, which is also required to be checked. The name of the city of Vrindavan includes the forest in it. This town was surrounded with the forests and gardens. The monkeys are the residents of Braj – Vrindavan from the time immemorial.

In the religious texts it is found that they were rehabilitated in Braj by none other than Shri Krishna’s grandson Bajranabh. There were plenty of forests with fruit trees and water bodies in it. The monkeys were living happily in Vrindavan. They had enough to eat from the forests and gardens. They could drink fresh water from the kunds. It is not that the population of the monkeys didn’t grow from the 5000 years before till this day. But somehow their growth was managed naturally.

As the pilgrimage town of Vrindavan began urbanized, its effect could be seen in the monkeys living in the forests and groves of Vrindavan. They became urban monkeys. They needed food to survive. In the absence of the natural food i.e grains, fruits, leaves, herbs etc. The monkeys largely depended on the grams, banana etc. offered by the pilgrims. During the lockdown due to the pandemic, the monkeys are starving without food. Some animal lovers are feeding them, but it is insufficient.

With the passing time the behavior of the pilgrims changed. They come here no more for the pilgrimage, but it has become more about the weekend tourism. These tourists are more interested in the self, eating chat pakora recipes and lassi. They don’t follow the traditions of feeding the monkeys, cows, widows and poor.

Nidhivan and Seva kunj have been the favorite places of the monkeys. They are associated with these groves from many centuries.  People used to feed the monkeys with grams, bananas and breads in these sacred groves. But these days not many people feed them.

The monkeys live in hunger, which is the basic reason of nefarious activities of monkeys. They are not left with any other option, but to steal and loot. Though some kind hearted visitors feed the monkeys with bananas and other fruits on the weekends, but rest of the days they hanker for eatables and apply different tricks to fill their belly. The abandoning of specs or even bags in liew of some eatable shows the monkey pick up these items to seek food in return.

They don’t get fresh water to drink and are forced to drink the sewer water. Before there were many fresh water tanks which were built for cows, horses, monkeys and other street animals to drink. But these days the charity has confined in the concrete walls where the humans are fed. The feeding fest is known as bhandaras. No one has thought of feeding the monkeys who are also brajwasis.

Vrindavan is the land of love, where the Divine Couple of Radha and Krishna dwells. Hundreds of saints have meditated on this land. Even the trees of Braja were considered to be the saints, who are meditating in Braj as the form of the trees. The Mughal emperor Akbar banned hunting of animals in Vrindavan.

The strategy of catching monkeys and releasing them at far off distance has not worked so far. A proposal of monkey safari was sent to the state government by the district authorities, but no decision has been taken on that so far.

The solution of this human monkey conflict lies in the massive forestation work. We humans have to give their habitat back to the monkeys. Massive tree plantation efforts and recreation of the forests and groves with the majority of the fruit trees will help rehabilitating the monkeys as long term solution.

Identifying some forest areas in Braj and developing it as sanctuaries may be helpful. The government should sterilize the monkeys before shifting them to these sanctuaries. The availability of enough food and water should be ensured.  The visitors should be encouraged to visit these sanctuaries, where they can feed the monkeys. Eventually the monkeys may migrate to the forests when the trees grow to the fullest. 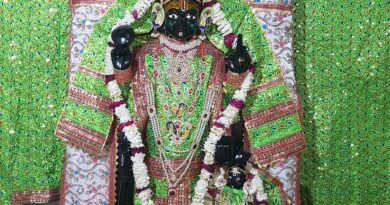 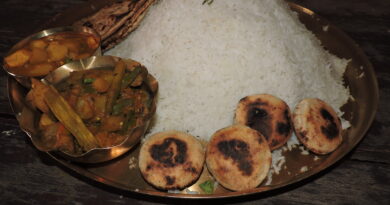