2022.04.09 (Vrindavan Today News Service): April 2 to 10, 2022 India is celebrating the festival of Chaitra Navaratri – the nine nights dedicated to Devi. Like everything else, Navratri in Braj is also subsumed in Krishna Bhakti, whether through the worship and contemplation of Radha and her ashtasakhis or through the nine manifestations of Devi associated with Krishna lilas in various forms and names. Everyday during ‘Navratri’ our articles will take readers on the trail of Braj’s own shakti peethas – the nine energy centers dedicated to celebrating the feminine. On the eighth day of Navratri, we pay our obeisance to Maa Yogmaya Devi of Yogpeeth of Goma Teela.

During Chaitra Navaratri, ‘Vrindavan Today’ is introducing you to the different  Devi temples of Vraja Vrindavan. Today, we take you for darshan of ‘Maa Yogmaya’ of Goma Teela (the mound upon which Govind Dev temple is built). Among Brajwasis, Goma Teela  Yogamaya  is also known as ‘Patal Devi’. Yogamaya’s nickname ‘Patal Devi’ may refer to her position under the ground, as Patal Lok is the lowest of the three worlds.

The name also indicates Durga Maya’s ability to subdue demons from the underworld. The entrance to Yogmaya temple  is adjacent to the main alter of the iconic old red sandstone building that is Radha Govinda Temple. On the Southern side of the temple, built into the overall design, there is a raised entranceway that leads into an underground chamber. This chamber is generally accepted as the place where the original Govinda ji deity appeared, and supposedly once served as a subterranean bhajan kutir for Roop Goswami. Patal Devi is installed in the underground chamber.

The deity is very small and delicately beautiful. Yogamaya temple only opens a couple of times in a year, during Navaratri. On other days, special permission has to be requested from the priest on the altar. Before Govinda Dev was moved to Jaipur, He was seated on the main altar with Vrinda Devi on the left and Yogamaya on the right. Now Vrinda Devi has been moved to Kama and Yogamaya has moved to Roop Goswami’s bhajan kutir, next to the temple. Patal Devi temple is closed for the entire year except on Navaratri. It is not easy to have darshan of Yogmaya Devi. On request, the temple priest at Govind Dev temple can open the door to allow visitors to enter the basement chamber where the deity of goddess Yogamaya is installed. There is an inner passage from Sanctum Sanctorum of the main alter, from where the priests have direct access to the ‘Yog-peeth’. 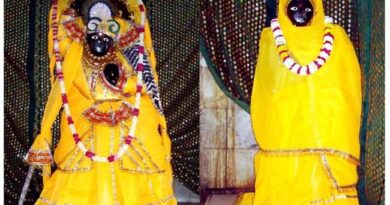 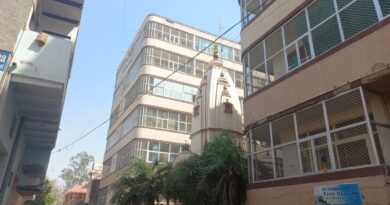