Though Gadadhar Bhatt was originally from Telanga, he wrote songs in Braj Bhasha in the mood of a ‘gopi’.

2021-11-04(Vrindavan Today News): Shri Gadadhar Bhatt’s charming deities of Radha-Madan Mohan who appeared from the sacred sands of Yamuna on Magh Shukla Basant Panchami (somewhere around VS 1600), are worshiped at the ‘Gadadhar Bhatt Goswami Peeth Shri Madan Mohan Mandir’ located near the east gate of Radhavallabh temple in Atkhamaba.

The lordships are served by descendants of Shri Gadadhar Bhatt at the ‘peeth’ today. While all traditions and festivals are celebrated, the temple’s samaj gayan (Bhatt ji ki Samaj)  and sanjhi are particularly famous.

How Gadadhar Bhatt came to Vrindavan

Not much is known about Gadadhar Bhatt. The main source of information comes from Priya Das’s commentary on Bhakta-māla, which tells the popular story of how he came to stay Vrindavan.

Though Gadadhar Bhatt was originally from Telanga, he wrote songs in Braj Bhasha in the mood of a gopi. One of these songs became popular and was even sung in Braj, though he lived somewhere outside the holy land. That song was the following:

Oh Sakhi! I have been transformed by the colors of Shyam.

On seeing his beautiful form, I sold my soul to him.

I lost myself in his beauty.

When I fall asleep I lose myself in dreams of him,

And when I awake, I don’t see anything as separate from him.

It is as though my eyes have been trapped by his form,

like a bumblebee trapped at night in a lotus flower.

When I hear that he has gone to graze the cows,

I don’t know of what Kanhai people are talking [for he is with me always].

Who will listen to me? Who will believe me when I say it is all nonsense.

How can Gadadhar explain any of this?

I am like a dumb person trying to explain the taste of gur (jaggery).

One day, Sri Jiva Goswami heard someone singing this song, he was simultaneously delighted and disappointed, for though the author had obvious devotion and talent, there was no mention of Srimati Radharani. Nevertheless he thought, I would like to have the association of such a devotee and hear more of his songs. When he found out that Gadadhar Bhatt lived somewhere outside of Braj, he thought that such a devotee belongs in Vrindavan Dham. So he sent him a letter with two confidantes. The letter contained only this one verse written by Raghunath Das Goswami.

Not having worshiped even once the dust

that sprinkles from Śrīmatī’s lotus feet;

not having taken shelter even once

of Braja Dhām, marked with her dainty tread;

not ever having spoken with the souls

so laden with the weighty love for her,

how foolish they who think that they can plunge

into the secret sea of nectar that is Śyāma!

According to Priya Das, Jiva Goswami’s message was, “I don’t know how you got this mood when you are living outside of Braj and have no association with the servants of Radha. It is no doubt the result of some previous lifetime of service to great bhaktas. But in order to perfect it, you must follow in the mood of Radha and live in the association of her devotees in Vrindavan. Otherwise, it will never attain its fulfillment.”

When the message came to Gadadhar Bhatt in his village, he was sitting next to a well brushing his teeth. He was overjoyed to see two sadhus early in the morning and when they told him they had come from Vrindavan with a message from Jiva Goswami, he fainted and fell to the ground. When he came back to consciousness and read the letter, he touched it to his forehead, dropped everything and returned to Vrindavan with the two associates of Jiva Goswami.

Gadadhar Bhatt studied with Jiva Goswami and Raghunath Bhatt Goswami and when the latter left the world, then Gadadhar took over his permanent spot at Govindaji temple speaking the Bhagavatam. His reputation as a speaker of Bhagavatam was his main claim to fame and he has been mentioned in the writings of Dhruvdas (Bhakta-nāmāvalī), Nagaridas (Pada-prasaṅga-mālā), Bhagavat Rasik (Rasika Devajū kī Vāṇī) and Chacha Vrindavan Das (Bhakti-rasa phūṭakāra prasaṅga) for this reason. Some of these authors have also recounted other legends about him.

Raghunath Bhatt’s temple to Madan Mohan, whose seva is in the hands of the Gadadhar Bhatt’s descendants, stands next to the Radha Vallabha Ghera near Athkhamba Mahadeva. 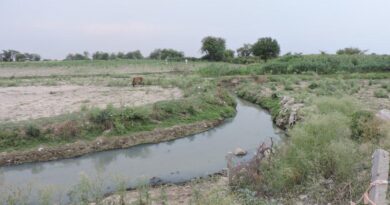 Complete ban on the sale of liquor and meat in Mathura 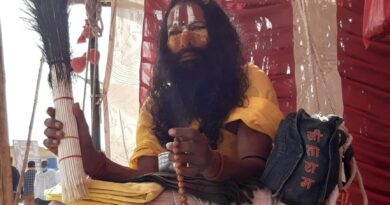