Even though prima facie evidence does not suggest any foul play, the cover up does raise some suspicion. The reason for the two-year-old feline’s death will be conclusively established only after receiving the post mortem report from Mathura’s Veterinary Hospital.

Vrindavan, 2021-10-04 (Vrindavan Today News): Forest department officials, on Sunday, unearthed the carcass of a two-year-old leopard that was buried in the reserved forest area of Ahilyaganj by the villagers. The matter, which was otherwise being hushed up, came to their notice when pictures of dead feline clicked by some local residents went viral. The officials at once seized the body, and sent it for post mortem at Mathura’s Veterinary Hospital to determine the cause of death.

On Sunday evening Forest Range officer, Shri Meghraj Sharma and his team reached the site after the viral pictures caught their attention. Upon enquiring, they were able to trace the feline’s dead body buried in the reserved forest area near Ahilyaganj.

Meghraj Sharma told the media that leopards and other predatory animals of the family are not sighted in this area usually. Hence, it is possible that the animal lost its way into the fields of Ahilyaganj, coming from Shivpuri, Madhya Pradesh on Saturday evening. Because the body did not display any signs of serious injuries, it is being assumed that the feline died after getting entangled in and injured by the barbed wires when it was trying to enter the fields. On inspection, it was found that the carcass was nearly 24 hour-old when it was unearthed.

Even though prima facie evidence does not suggest any foul play, the cover up does raise some suspicion, and the reason for the leopard’s death can be conclusively established only once the post mortem report is out, said Sharma. 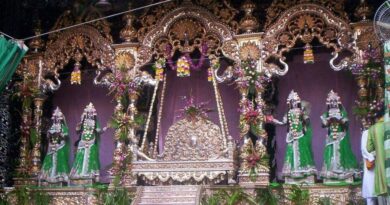