The celebration this year was accentuated with the delight of the 100th birth anniversary of ‘Nityalila Pravishta’ Jagatguru Shri Purushottam Goswami ji Maharaj.

FOR THE PLEASURE OF SHRI RADHARAMAN

During the Mahotsav Shri Radharaman’s day begins at 4.30am with the early morning aarti and a complete reading of Shrimad Bhagavatam performed by 24 Sanskrit scholars. It was followed by renditions of Shri Chaitanya Bhagvatam and ‘sankirtan’ by Bengali Vaishnavas. Stotras such as Gopal Sahasranam and Narayan Kavach were then chanted to bestow auspiciousness on all.

Every day for 33 days, Shri Radharaman gave darshan from a new ‘Kunj’ made with flowers, leaves, fruits and other plant material. The idea behind these kunjs was that the service was being performed by the 33 koti (categories) of demigods (12 Adityas, 8 Vasus, 11 Rudras and 2 Ashwini Kumaras),  one for each of the 33 days. While someone pleased Radharaman with a mansion of delicious mangoes, others shielded Him from the summer heat with water fountains, hand fans and water pitchers.

A special ceremony called ‘Rajopachar Seva’ is offered to the Lord twice a day during Shringar Aarati and Sandhya Aarati. Devotees held flags and other sacred insignia during the aartis as a mark of respect for the deity. People often comment that when Acharya Shrivatsa Goswami ji and his sons are in charge of the seva, Radharaman Lal looks like a young prince. Befittingly, Radharaman ji wore gorgeous new outfits specially woven by the family of Mahahraj ji every day. New ornaments and special bhog were offered to Him.

It would be of interest here to note that His Holiness Acharya Shrivatsa Goswami Maharaj is one of the seniormost Acharya of Shri Radharaman Temple and an internationally acclaimed personality. He is also the founding trustee of ‘Vrindavan Today News’, and the founder of environmental group ‘Friends of Vrindavan’. 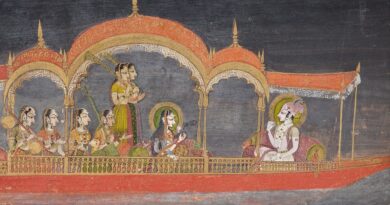 Nagridas immortalized Holi in his verses 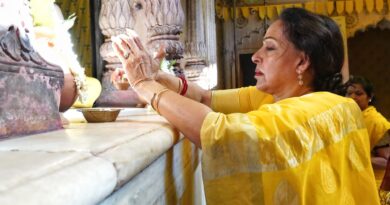 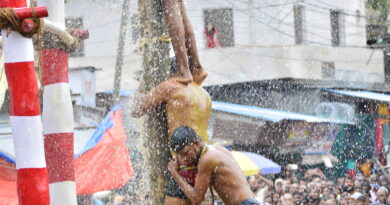