Sanjhi is not just an art; it is the lila where Radha and Krishna meet every evening after a ‘long’ afternoon of separation. In the temples of Vrindvan, Sajhi is worshipped as Shri Radha Herself. The folk tradition of rural Braj reveres Her as Mata Parvati.

Vrindavan, 2021-09-21 (Vrindavan Today News) Ashwin Krishna Paksh (dark fortnight of the Hindu month of Ashwin) is observed as Pitru Paksh in India. It is a sombre time when people carry out religious activities for the well-being, satisfaction and ultimate liberation of the ancestors. Yogis consider it a potent time for sadhana as well.

Brajwasis, however, have their own unique way of placating the ancestors and seeking their blessings with art, songs, dance and food. In the perpetual celebration that is Braj-Vrindavan, even this solemn fortnight is observed as a festival called the Sanjhi Mahotsav.

Sanjhi is derived from the word saanjh or sandhya, meaning evening. It is said that when Krishna returned after grazing the cows (gocharan) in Godhuli bela (evening), Radha and Her sakhis used to welcome Him with splendid flower designs made all along the path. There’s also a belief and references indicating that Krishna too joined Her in making sanjhis. Sanjhi is therefore not just an art; it is the lila of the meeting of the divine beloveds after a long afternoon of separation. In the temples of Vrindvan, Sajhis are worshipped as Shri Radha Herself. The folk tradition of rural Braj reveres Her as Mata Parvati, the divine consort of Shiva.

Every evening, for fifteen days, a mystical atmosphere is created in the devalayas of Braj with grand aartis, lamps, bhog and raag seva and of course, the graceful sanjhis that are worshipped before being immersed in water, only for the lila to begin again next morning.

Mostly, the festival begins with offering flower sanjhis to the deities in temples. Later many different kinds of designs are made in temples and homes using flowers, colours, cowries, cow dung and other decorative material. From flowers and animals to Krishna Lilas and folk tales, everything is depicted in these exquisite works of art.

According to the director of Vrindavan Research Institute, Shri Satishchandra Dikshit, nearly 15 motifs have been described in the manuscripts as being central to sanjhi in Braj. These include Bhagwaan Ganesh, the sacred syllable OM, Swastik, the moon and stars and the sun, teen tiwari, the eight-petalled flower, palki (palanquin), betel leaves and nuts, date palm tree, boat, bow and arrow, sanjha-sanjhi, patta-wali-amma, shravan kumar, beejna and kot.

Sanjhi artist Rasik Vallabh Nagarch shares that it takes as much as 10-12 hours to make one sanjhi. One of the most astounding kinds of sanjhi is the ‘jal sanjhi’ that is made on the top and bottom surface of water. Coloured powder is sprinkled on a fine mulmul/cotton cloth and tapped slowly with fingers such that it neatly sieves through the design embossed on the fabric and stays still on the mobile medium.

The sanjhis of Radhavallabh, Radharaman, Bhattji Ki Haveli, and Shahjahanpur temples are particularly notable in Vrindavan.

Beyond the temples, one can find Sanjhi in the songs and literature of Braj. Veritable saints such as Mahakavi Surdas, Goswami Harirai ji, Vallabh Rasik, Hit Rooplal Goswami, Premdas, Vrindavandas, Lalit Kishori, Lalit Madhuri, Gunamanjari, Haripriya ji and others have depicted the art and the festival copiously in their pad-padavalis that are sung during samaj gayan in temples at dusk.

Raja Sawant Singh – the 17th century ruler of Kishangarh (Rajasthan) was a great patron of the art of Sanjhi. He is better known in Braj as the exceptional poet Nagaridas who settled in Vrindavan forever with his second wife Banithani in the year 1762. Not only did he immortalise the tradition in his works, but also played a pivotal role in preserving and promoting it through organising various festivals that took Sanjhi beyond temples 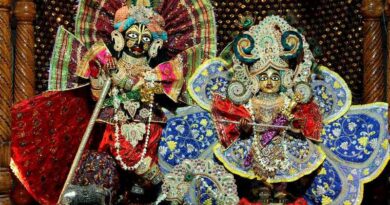 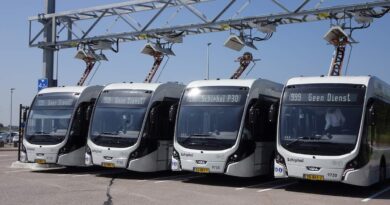 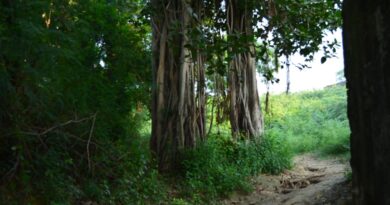