2022.10.14 (Vrindavan Today News): The Braj 84 kos Yatra from Maan Mandir Barsana was called off for the first time in 32 years since it was started in 1988. The ‘Radharani Braj Yatra’ was called off on Wednesday because of the effect of the continued rainfall for three days on from 7th October to 10th October 2022. The continued rain resulted into water logging and excessively wet field condition at the different pilgrimage stations. The different locations where the camps were about to set up for the pilgrimage was found water logged or the ground was too wet and muddy to set up the camps for such a big number of people.  The 72 hours downpour had wreaked havoc in Braj, causing severe damages to the crops and filled the fields with water.

Roughly 14000 pilgrims from West Bengal, Odhisha, Bihar and other parts of the country had arrived in Barsana before a fortnight to take part in the pilgrimage. They were staying in the tent camps arranged by Maan Mandir. The camps were made under the open sky in the fields near Gahavarvan.

The pilgrimage was to begin on Sharad Purnima, but it couldn’t takeoff due to the rain.  The pilgrims went to the local temples and had darshan. Then the Yatra formally began on Tuesday by taking the sacred vow to begin the Braj 84 Kos Yatra pilgrimage.

On the first day the Yatra was made to Gahavarvan, Vilasgadh, Unchagaon and other pilgrimage locations. The next camping station was scheduled at Nandgaon. But the location where the tent- camp was to be setup was water-logged and became muddy. The organizers tried to find alternate sites to set up the camp, but no suitable place was found which could accommodate 14000 pilgrims. Alternate ways to continue the pilgrimage was discussed, which included performing the ‘Yatra’ on vehicles. It was found that 15 locations where the Yatra would visit on consecutive days were water-logged. There were apprehensions of the outbreak of the water borne diseases at the camps.

The base camp at Gahavar van was also uprooted because of the continuous rain and thunder storm. The Yatra was supposed to commence from 9th October and was scheduled to end on 13th November. All the arrangements for the free food and lodging were made by Shri Maan Mandir Seva Trust.

Shri Ramesh Baba also became emotional and felt disheartened when he came to know that the ‘Braj Yatra’ couldn’t proceed and was suspended. He told his followers that our heads are down before the Mother Nature. But the vow which has already been taken to perform Parikrama will not be broken. As soon as the weather is favorable and it is safe to make a move for the pilgrimage, the alternate dates for the Parikrama will be announced.

It should be noted that Shri Ramesh Baba started the Annual Braj Chaurasi Kos yatra in the year 1988. Despite several hurdles came on the way to organize the pilgrimage, the 84 Kos Yatra was never suspended. This is the first time when the pilgrimage of 84 Kos Parikrama is suspended. The initial years saw less than a thousand pilgrims participated in 84 kos parikrama. Gradually the Annual Yatra became so popular that the number of people participating crossed ten thousand.

YATRA CONTINUED EVEN DURING THE LOCKDOWN

Even the lockdown phase of the pandemic Covid -19 couldn’t stop the Yatra. While Schools, Universities, Shops, Markets, Offices etc. were closed and there were restrictions in organizing the events, the Annual Braj 84 Kos Yatra was organized even in those days. Seven hundred devotees participated in the first phase of the lockdown; whereas more than a thousand people took part in the Yatra in the second phase of the lockdown.

PILGRIMS ASKED TO RETURN TO THEIR HOMES

More than fourteen thousand pilgrims have been camping in the fields near the Gahavar Van and at Mataji Gaushala campus. Free food and lodging are provided to the pilgrims by the Maan Mandir Seva Trust. Since the Yatra has been suspended, the pilgrims were asked to return to their homes. The return of all the pilgrims to their native places will take 15-20 days time as they have to get the reservation tickets in the trains. 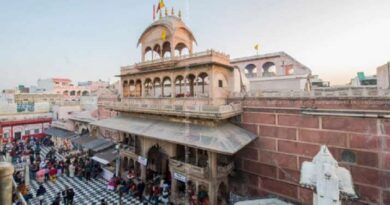 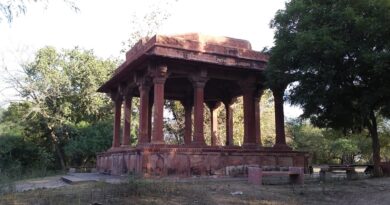 New Cultural Centers to Be Set Up in Braj